EarthRover 1 and EarthMan 2, First publicly performed together as selected for the TEXAS BIENNIAL 2013

(CNN) -- Dion Laurent's rover EarthRover 1 successfully carried out a highly challenging landing in Houston, Texas early Monday, transmitting images back to Earth after traveling hundreds of hours through Texas in order to explore the Blue and Green Planet.

The $2.6 thousand EarthRover 1 made its dramatic arrival on Houston terrain in a spectacle popularly known as the "seven minutes of terror".

This jaw-dropping landing process, involving a sky crane and the world's smallest supersonic parachute, allowed the trailer carrying EarthRover 1 to target the landing area that EarthMan 2 had meticulously chosen.

The mission control in Laurent's Earth Science Laboratory in Texas burst into cheers as the rover touched down. Team members hugged and high-fived one another as EarthRover 1 landed in Houston's First Ward, some shed tears.

EarthRover 1 is a hand-built solar powered electric vehicle, a rolling sculpture created from wood and metal, found and bought and fabricated parts. It has a fully articulated chassis that rolls on 6 wheels with a rocker-bogey suspension system. It features a terrarium oxygen supply system - a bio-regenerative life support system, and is manned by EarthMan 2. Their mission is to study the environment of Earth. EarthRover 1 is based on the NASA created Mars Rover, Curiosity, launched in November 2011 and successfully deployed on Mars on August 6, 2012.

State Fair is a public spectacle that takes as its inspiration the construct of a contemporary art fair and merges it with the age-old tradition of street peddling. Organized to coincide Houston’s first-ever public art fairs, The Houston Fine Art Fair in September and the Texas Contemporary in October, State Fair is an arts-centric trade show with a twist in which artists from around the state …

AirPlane 1 is on display as part of the site-specific installation, AirStation in the 1930's Art Deco Gas Station building directly across the road from the Station Museum of Contemporary Art, Houston, Texas.

It is a reflection to a world of ever increasing air pollution, ozone action days, water shortages, droughts and oil spills.

Conceptually, it's a self-contained, self-sustaining bio-environment; a one-room emergency AirStation supplied air as a greenhouse air station, creating a simple biosphere exchange system similar to that of Planet Earth.
AirStation is an ongoing project that will develop over the course of the next 6 months.  Periodic modifications and improvements to the biosphere system and planned performances will be announced and documented on a monthly basis.

AirPlane1, awarded first place in the Houston Art Car Parade will be part of the installation, and EarthMan 2 will be publicly performing .

All 3 elements of this performance and installation blend art and science and relate to bioregenerative life support systems, self-sustaining systems conceptually capable of maintaining a human in otherwise unlivable environments on our increasingly polluted earth or even in outer space.

As one of the most exciting art movements of our time, environmental art celebrates our connection to the natural world through beauty, science, metaphor and ecological restoration. It encompasses a surprising landscape of approaches, from ephemeral "art in nature" sculpture designed to last only a few hours before returning to the earth, to community-based "eco-art" installations which clean up polluted watersheds and promote public understanding of local and global environmental issues.

The Environmental Art 2010 wall calendar features fifteen projects drawn from the global archives of greenmuseum.org, a not-for-profit online museum of environmental art. They provide a sampling of some of the latest developments in this field to stimulate the imagination and promote the role of art in the creation of a more sustainable world culture. 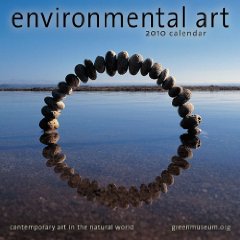 EarthMan Gives a Flower to Paris Hilton at the Atrium during a performance at Art Basel Miami Beach, Dec. 2007

EarthMan on the cover of Seattle's The Stranger

EarthMan in Seattle, a Stranger Video

EarthMan in London - Video on Green.tv

EarthMan and 3 other videos by Dion Laurent

EarthMan Performances at select events without prior notice throughout 2006-2007.

The week of August 22-28:
A suggested nominee for
The Detroit Museum of New Art
you're so 21st century
the search for the greatest living artist
Greatest Living Artist

An Open Proposal:
Another Barcode Series by Dion Laurent
"Barcodes of Life" 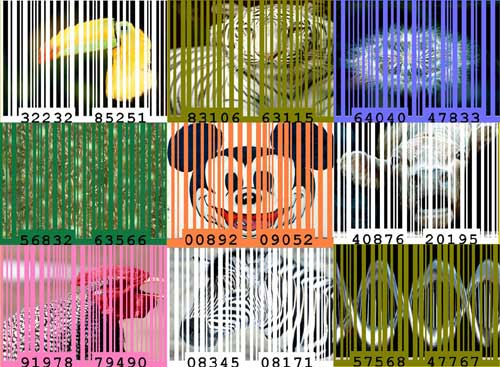 An open proposal to the Museum of Natural History, London, The Smithsonian Institute, Washington, D.C., etc. and so on as further image and data sources for the barcoding of all the world's life forms in image and numeric forms using Dion Laurent's barcode image software. This project is a variant of "The Golden Age of Barcodes" and "The Barcode Series", "Made In (Flags) and "Sex Sells", "One Billion", etc., in consideration of The Barcodes of Life Initiative and the International Conference for the Barcoding of Life.  This is an open call for assistance to procure images of all the world's specimens to visually barcode their forms in conjunction with and to coincide with the scientific communities' desire to profile species DNA data with barcodes.  This project is to profile such scientific data in an identifiable barcode image form with relevant barcode number identification and color codes as for each identifiable specimen.

The Golden Age of Barcodes is accepted for inclusion in the Rhizome.org Art Base at The New Museum, N.Y.,N.Y..

Completion of "The Pipeline Project" Video. A video and installation project in progress.

A review of "The Shelter Project" installation by a London based internet art extravaganza...

To Whomever posted us here, "Thank You"

Road-trip from Houston to Nashville and Chicago

FOR INFORMATION AND DOCUMENTATION OF EXHIBITS AND PROJECTS FROM 1988-2003, PLEASE SEE BIOGRAPHY

All text, images and web pages at Dion Laurent.com are Copyright Dion Laurent 1990-2008.  Use of any images without prior written consent of Dion Laurent is expressly prohibited.  All rights reserved.